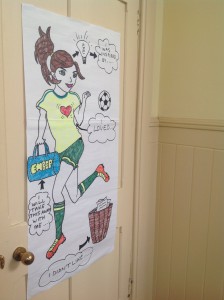 The Edinburgh workshop, jointly facilitated by Befriending Networks and the Scottish Mentoring Network, was held from 25-28 June 2014 on the subject of ‘how to develop and run a national quality award scheme for mentoring/befriending programmes’. After a welcome dinner on Wednesday evening which enabled us to greet old friends and meet new faces, we convened on the morning of 26 June at the impressively situated Scotch Whisky Centre, at the top of the Royal Mile in the heart of Edinburgh’s Old Town, for a full day of presentations and discussions.

After the initial introductions and icebreaker exercises, the session objectives were explored: the group were invited to discuss what constituted quality and why it mattered, followed by a more specific discussion about why quality mattered in mentoring and befriending, to the befriendees/mentees, to befrienders/mentors, to the organisation itself, and to funders. We were careful during these discussions to have a range of nationalities at each table, to facilitate shared learning and experiences. 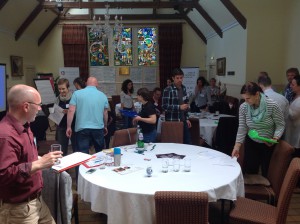 Later in the morning there were two presentations describing Befriending Networks’ and the Scottish Mentoring Network’s Quality Award processes. Participants were then invited to spend time reflecting on what they’d heard, and consider what it would take to enable the creation of a national quality award for their respective countries, using a ‘three horizons’ approach: the first horizon being the current situation, the third being the desired future and the second horizon describing concrete steps that would need to be taken to bridge the two.

After lunch, there was a brief energiser, followed by a more in depth analysis of a future potential European quality standard, looking at existing strengths to build on, weaknesses to overcome, opportunities to capitalise on, and threats which would need to be minimised. The group then worked in pairs and then in fours to discuss the principles of a shared European quality framework-what it should be and what it needed to have. Brief evaluations were undertaken of this first day of the workshop.

The work of Day 1 was complemented for the visitors by exploring Edinburgh in the early evening via the medium of a ‘treasure hunt’ round the town, followed by dinner and then, for the diehards, a trip to the Scotch Whisky vaults in Leith to learn about and sample Scotland’s most famous export.

On Day 2, participants convened at a different venue: the Scottish Council for Voluntary Organisations’ building in the centre of Edinburgh. The theme for the first part of the morning was the practical implementation of a national quality award-the indicators used to measure quality and the process by which the evidence of quality is submitted. After this group exercise fed back to the main group, there were presentations by four befriending or mentoring services which described how the process felt to them of undertaking an award, and the value for their respective agencies. These presentations were filmed (can be found here).

After the presentations, there were table consultations with each service, giving participants an opportunity to ask any questions. Evaluations were collated from Day 2.

The cultural activities that followed the final reflections and close of the workshop, involved a visit to Edinburgh Castle, followed by a trip through Edinburgh on a canal boat, with dinner on board.

The following day, those participants who did not have to leave for immediate flights took an Auld Reekie Underground Tour-a trip down in to the vaults underneath the old town.

We loved hosting the workshop for our European partners, and as can be seen from the full write up of the event, there was a huge amount of valuable discussion, shared learning and positive ideas to take away. We’re enthused by the notion that our partners have begun to consider the possibility of a pan-European quality standard for mentoring and befriending, and we look forward to continuing our discussions at the next workshops and in between.