Our Scottish partners also wrote about the workshop: 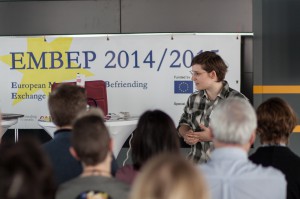 Early in 2013 Scottish Mentoring Network was invited along with Befriending Networks to join a new European Partnership lead by Netzwerk Berliner Kinderpatenschaften and including Mentoring USA-Italia Onlus in Salerno, and Caritas Schweiz in Lucerne, Switzerland. This project is funded by the Grundtvig Lifelong Learning programme and is designed to enable the exchange of good practice between the participating organisations. Following acceptance of our application by the UK agency of the European Union in autumn last year we have been planning the programme of exchange visits with our partners. Each partner has a specific topic to address between now and March 2015 and the first workshop took place at the end of February/early March 2014 and was held in Berlin. We were joined in the workshop by colleagues from Sweden and Austria. The topic was an issue focussed mentoring and befriending project on sustainability where we learned how our German partners were using education on sustainable development to engage with the young people they were working with in the mentoring and befriending project many of whom came from immigrant backgrounds. Berlin is a very cosmopolitan city with around 186 different nationalities living there so integration is a very important issue. During the project they worked with 40 mentoring/befriending relationships and used work diaries from both the mentors and mentees as part of the evaluation process.

Although the project had some funding much of the work was undertaken by volunteers which seems to be the current pattern for a number of the 26 projects in the Berlin network. The workshop was held in Total Tour a brand new office block across from Berlin’s central rail station. One of the volunteers works for Total and she was able to get free use of the exhibition room on the 14th floor which gives magnificent panoramic views of Berlin. The whole visit was really well organised including a visit to the magnificent Reistag where the German parliament meets. There we had the opportunity of meeting with an adviser to one of the Ministers and telling him about how Scottish Mentoring Network operates and the benefits of a national organisation to support local networks and individual projects. On the back of our own success story we were able to advocate central funding for the Berlin network and perhaps even a national network in Germany. 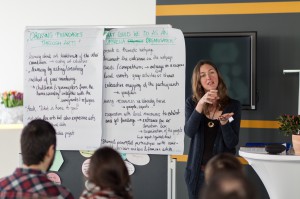 On the Saturday morning we had a special walking tour of parts of Berlin. The tour was led by a former homeless man who gave us a fascinating insight in to the life of homeless people in Berlin. He had once been a senior sales executive travelling the world but when the pressure had got too much for him he walked out of his job. From then on his life had spiralled out of control and within 18 months he found himself homeless – he told us this story whilst standing in a beautiful square next to the grand apartment block where he used to live which made it all the more poignant. It took him a long time to engage with the authorities to seek the help he needed and it is only recently he has started to get his life back together. The walking tours are run by a charity and all the guides are former homeless people.

The whole visit was really well organised and I had the pleasure of the company of Alana Taylor-Pae from the YMCA in Leith Plusone project, Morag Kerr one of SMN’s directors who as part of her own work also trains teachers in resilience and, Shug McRoberts from Move On in Glasgow. The next workshop is being hosted in June jointly by Scottish Mentoring Network and Befriending Networks and will be held in Edinburgh. Mentoring, particularly for young people, is alive and well in other European countries and we look forward to learning from each other.